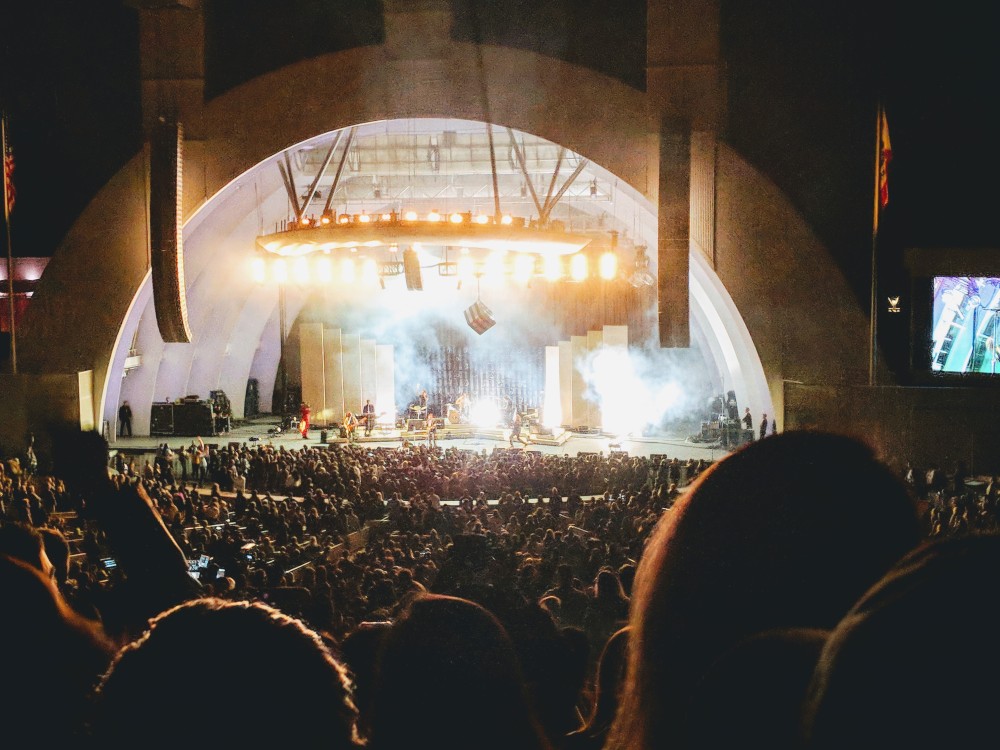 Not often, but sometimes I wish I were still 21, and my favorite band was still a coveted secret stateside. Just once more, I’d like to see Arctic Monkey at a General Admissions only venue, where you did your best to make it to the front and the whole crowd ignited at the riff of “Brianstorm.” No pretty visitors, just nerdy, die-hard fans

But things change and grow, and with a band as good as Arctic Monkeys, there was never a chance to hold onto the smaller venues, the niche crowds, the youthful defiance.

Over the past five years, Arctic Monkeys’ popularity has grown exponentially in the United States and abroad (where they’ve always been insanely popular). With it comes more expensive tickets and a larger, albeit often times less sincere, crowd. Those crowds take the band to places like the Hollywood Bowl, not just for one night, but two sold out appearances among the Hollywood stars (if you could even see them through the Hollywood haze).

Lead singer Alex Turner made sure to serenade those distant specs of light, reminding the Tuesday night crowd, “that isn’t how they look tonight, it took the light forever to get to your eyes.”

The night consisted of tunes pulled almost equally from Arctic Monkeys six albums, a discography that spans over 13 years. They played the usual crowd pleasers — “Do I Wanna Know?,” “I Bet You Look Good on the Dance Floor,” “Arabella” — but started their set with songs from their latest release, ‘Tranquility Base Hotel and Casino.’

Turner, the once shy 19-year-old trying to find his footing on stage, worked the Hollywood Bowl with an aloof charisma. He strutted and posed generously, fueled by a carefully constructed bravado and rock star persona. His movement was constant for some songs, and yet, at other points, he seemed set in place behind a piano, crooning his cosmic, interstellar space songs.

The stage itself was a beautiful art deco inspired contraption. Simple, but sleek designs and eye catching lines were saturated with punchy lights and rotating colors of green, purple and red.

The whole operation was a well oiled machine that churned out three hours of solid music and fantastic live performances from all bands on the bill. Openers The Lemon Twiggs and Mini Mansions were a smart choice to pair Arctic Monkeys with, especially in Los Angeles — the latter has close ties to Arctic Monkeys and have collaborated with Turner on various side projects.

While the crowd seemed hesitant on some of Arctic Monkeys newer songs — many wandered over to the merch table when “She Looks Like Fun” came on and quickly ran back once they heard the opening riff of “Do I Wanna Know?” — there was never a true lull in the night, nor was there anyone who looked disappointed with the evening’s progression. Although ‘Tranquility Base Hotel and Casino’ left many fans divided in opinion over the album’s light speed departure from their previous work, it didn’t deter from the crowd’s enthusiasm, and the night ended just as perfectly as it begun.

When in the past, the band pondered its own longevity in a fickle music industry (see their not so candid single and EP, “Who the Fuck Are Arctic Monkeys”), it’s now not a stretch to say Arctic Monkeys are one of the top rock bands of their generation. They’ve come far from their debut, an album deeply rooted in their hometown of Sheffield, and instead of looking to their own backyard, the band casts its gaze on an infinite galaxy, all the while still making commentary on earthly endeavors.

As much as this writer enjoys that elevated view, I still get a particular chill every time they play an older song — the nostalgia of hearing it live for the first time always cues a rush of serotonin in my brain even still.

Granted, I haven’t been able to make it to the front of the crowd for some time now, and I don’t have the patience to jump through new hoops to see them in the same way I used to. But on nights like last night, at the Hollywood Bowl, I wished to feel the familiar sting of bursting blood vessels as my ribs bruised against the barricade. After all, that used to be part of the fun.

Still, I don’t fawn too much over the past, because as long as Arctic Monkeys release new music and tour, there will always be something new to rave about and enjoy.

View all posts by pcsanchez7505